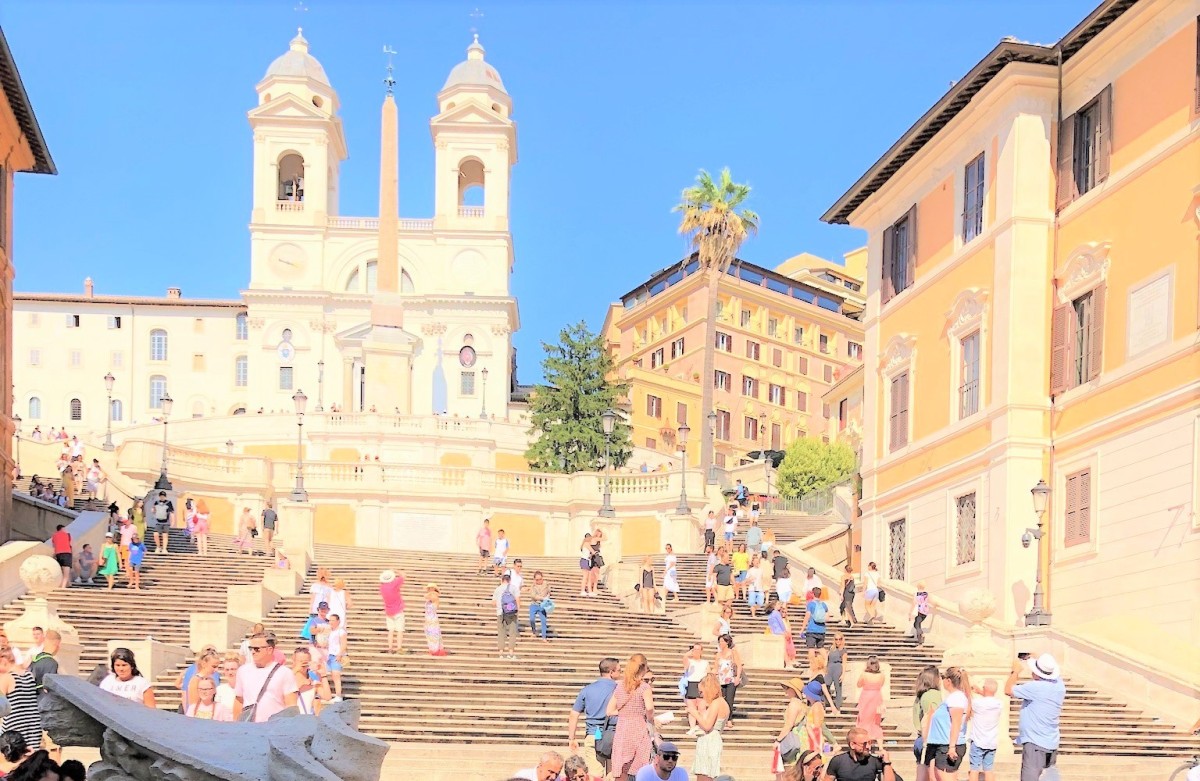 Explore the most famous squares in Rome in One afternoon

When my husband and I decided to visit different cities in Italy (A Day in Milan, The Vatican Museums), we devoted four days and nights to Rome because we wanted to make the best of our stay in the Eternal City.

We arrived in Rome in the afternoon. As soon as we checked in the hotel and placed our luggage, my husband and I, along with our two sons, started strolling around the streets of Rome. This is the best way to start exploring the city; you move from one piazza to another while discovering some of the main landmarks just by taking a pleasant walk.

Our starting point was Piazza del Popolo because if you look at the map, you see that it is located on top (see image below) followed by all the piazzas that we planned to visit. When we reached Piazza del Popolo we couldn’t but notice how large and unobstructed it was, in that it looks uncrowded despite the big number of tourists gathered in it, unlike other piazzas that are usually a bit stuffy. Piazza del Popolo’s location is indeed strategic as it used to be the main entrance to the city during the Roman Empire.

It lies inside the northern Roman gate known as Porta del Popolo. To the right side of the gate, there is a church that doesn’t look sophisticated so you might not give it any attention, whereas you do not want to pass by it and miss entering it. Known as the Basilica of Santa Maria del Popolo, this church is home to great works of art created by many renowned artists the likes of Bernini, Caravaggio and Bramante, to name a few.

On the opposite side, two almost identical churches known as the twin churches, Santa Maria di Montesanto and Santa Maria dei Miracoli, are the work of Carlo Rainaldi, one of Rome’s leading architects of the 17th century. These baroque churches serve as the entrance of Via del Corso, the main street in central Rome which is also a shopping destination.

My son in a café in piazza del Popolo, Porta del Popolo showing behind him.

To the left of Via del Corso, Via del Babuino takes you to Piazza di Spagna; to the right of Via del Corso, Via di Ripetta leads you to the Tiber, the longest river in Central Italy, after passing by the Mausoleum of Augustus, Rome’s first emperor tomb (check note below). We decided to take Via del Babuino because we were eager to discover Piazza di Spagna and its famous Spanish Steps.

The Mausoleum of Augustus

The largest circular tomb in the world that was built by the founder of the Roman Empire, emperor Augustus Caesar, is officially reopened to the public after being closed for so many years. Known as the Mausoleum of Augustus, this 2000 years old monument is a burial site for Augustus’ family.

We were immediately enchanted by the lively and heartwarming atmosphere prevailing in Piazza di Spagna. Perhaps the charm of this beautiful place lies in its singularity: on the one hand, it is a cozy and romantic piazza and on the other hand, it is bustling with people all around the square and in the cafés. A photo nearby Fontana della Barcaccia, the baroque fountain, with the Spanish Steps in the background is a must.

We wanted to have a nice cup of coffee and a tasty dessert nearby so we entered a lovely café that turned out to be THE Caffe Greco. It is the oldest bar in Rome and second oldest in Italy! A venue not like others, this café has witnessed for over 250 years visitors the like of renowned novelists such as Stendhal, Goethe, Charles Dickens and celebrities such as Audrey Hepburn, Sophia Loren and Elizabeth Taylor.

After this coffee break, we climbed the 138 steps up to the Trinita dei Monti church and enjoyed the exceptional view from the top. (photo below)

We reached Trevi Fountain, the most famous fountain in Rome which is a masterpiece. The imposing statue in the middle depicts the powerful god of the sea; standing on a chariot, he is pulled by two mythological creatures, half-horses, half-fish; one of them is calm and the other is unmanageable, representing the unstable seawaters, calm at times and stormy at others. Wisdom in a sculptor!

My family and I threw coins in the piazza and made our wishes, then we got some fun toys for the boys from the street merchants.

Most of you heard about the tradition of throwing a coin in Trevi Fountain to “boost” your wish to return to Rome someday. Well, so many tourists share this same wish and the coins thrown in the fountain amount to roughly one million dollars a year.

What is done with all these coins, you might ask? Well, they are collected and given to the charity Caritas that distributes the amounts of money to less fortunate people through a card program. Such an amazing initiative!

4- The Pantheon in Piazza della Rotonda

We left Trevi Fountain in the direction of Piazza della Rotonda where The Pantheon stands. To our great deception, the Roman Pantheon was closed by the time we reached the piazza. All was not lost because it was worth it to see it from the outside, take photos with it in the background, have coffee in a lovely café facing it and take more photos by the baroque Fountain of the Pantheon.

It is when I walked around the Pantheon that I realized it is cylindrical. To me, it had to be similar to other very famous rectangular temples such as the Roman Temple of Bacchus in Baalbek, Lebanon and the Greek temple known as the Parthenon in Athena, Greece. But the structure of the Pantheon is not as such; its uniqueness lies not only in the cylindrical shape but most importantly in its one-of-a-kind roof: the world’s largest unreinforced concrete dome to date! This phenomenal dome is also famous for its oculus, a circular window which serves as the only window in the Pantheon, the only source of light and air in the gigantic temple. Pure genius!

Many nice restaurants are lined up along the four sides of the piazza. So no matter in which one you sit, you get a full view of the piazza while enjoying Italian food and watching the street artists, painters, dancers and musicians keeping the piazza full of life. Piazza Navona is a great place to enjoy the vacation mode.

After discovering Piazza Spagna and its surroundings, we resumed our stroll in the neighboring streets leading to Trevi Fountain. It was so exhilarating to be able to move from one popular landmark to another, on foot and nonchalantly! It would take a 15 minute walk from Piazza di Spagna to Trevi Fountain.

But on our way, we came across a church and decided to enter it and say a little pray, assuming it would be a regular church for the locals. To our big surprise, the moment we stepped inside it we were astonished by its magnificent interior and the beautiful art it encompasses. Two splendid angel statues, one on the left side (Angel with the Crown of Thorns) and the other on the right side (Angel with the Superscription) of the church, were signed “Bernini”. This local church we discovered by chance turned out to be the 17th century Basilica Di Sant’Andrea delle Fratte (Basilica of Saint Andrew).